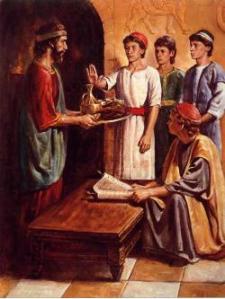 “By the example of Daniel and his fellows in Babylon, we see that it is impossible to reach the standard which that Lord would have His children reach, and practice an easy, accommodating kind of religion that leaves principle out, and is controlled by circumstances. Youth who would serve the God of heaven, cannot engage in worldly merriment, eat of enervating luxuries, or drink strong drink because it is set before them by the honored or wealthy men of the world, whom they fear to offend by refusing their favors. They may think that they have been especially honored, and that courtesy demands the acceptance of the favors proffered them; but loyalty to God must take the precedence, and fear to offend the Lord of heaven must control the Christian. The king of Babylon thought that he was bestowing great favors upon Daniel and his fellows; but they had respect unto God’s commandments more than unto the favor of the king…. God honored Daniel, and He will honor every youth who takes the course that Daniel took in honoring God.”