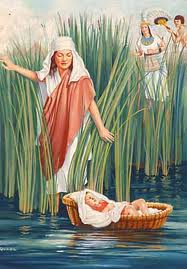 Has anyone ever thought that about Moses and who taught him when he was a child? Yes, his own “momma”, Jochebed. We know the story…she put him in a basket and he was found by Pharoah’s daughter…his sister saw the favor on the Princess’ face and asked her if she wanted her to find a nurse for the baby…and here comes Moses’ “momma”…getting paid to care for her own child.

So, I want to look at the Sunshine that Jochebed gave to Moses.

1. She was a praying mother. Would you make a basket for your child and put him in the River and then expect to get him back??? I think not. But, “God had heard the mother’s prayers; her faith had been rewarded.” Patriarchs and Prophets pg. 243

2. He was taught by his mom. Jochebed was his teacher. The Bible says that he grew…while he was growing Ms. Jochebed was teaching him about the Living God. She taught him to pray and bow down to the Living God. Exodus 2:10 says “and the child grew, and she brought him unto Pharaoh’s daughter, and he became her son’

3. Her lot in life did not deter her from her task of training Moses. “How far-reaching in its results was the influence of that one Hebrew woman, and she an exile and a slave!” Patriarchs and Prophets pg. 244

The list could go on and on. She had faith, courage, and strength. Wisdom and insight. Hope and trust in God alone.

And that is what I need as a Momma”…I need those traits as well…faith, hope and trust etc.

~You can read more of Tonya’s thoughts about sunshine in the home on her blog, Mommas Sunshine.

View all posts by Tonya

Welcome to the AHE blog!
We hope you will visit regularly to learn more about the principles of True Education, and enjoy
fun links, advice and ideas to make your homeschooling days a blessing to your family.